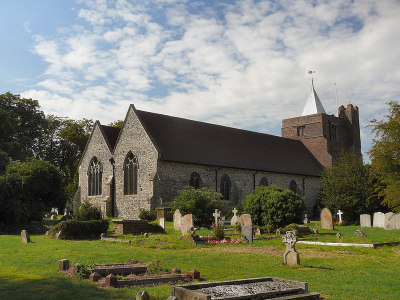 The church of St. Giles and All Saints is the parish church for Orsett and part of the United Benefice of Orsett, Bulphan and Horndon on the Hill.

The Church of St Giles and All Saints stands in the middle of Orsett.

The walls are of flint and ragstone-rubble with some Barnack and pudding-stone; the North West tower is mainly of brick. The dressings are of Reigate and other limestone; the roofs are tiled and the spire weather-boarded. The Nave is of mid 12thcentury date and incorporates the original 12th century chancel. A North aisle of three bays was added c. 1230, and about the same time a North chapel was added to the 12th-century chancel, which may then have been lengthened. About 1330–1340 the present Chancel was built beyond the former chancel, which was then thrown into the nave, a connecting bay being inserted between the nave arcade and the 13th century arch North of the original chancel; at the same time the 13th century chapel was abolished and the whole of the North Aisle re-built and widened. In the 15th century the North-West Tower was added, encroaching on the aisle, the West wall of the nave was re-built and the South Porch added. About 1500 the North Chapel was added. In 1610 much of the tower was re-built, and extensive repairs or additions to it were made in 1674. The Organ Chamber, South Transept and North Vestry are modern, and the South porch has been mostly re-built.

The church suffered from a fire in July 1926 which required a major restoration of the roofs.  Ironically the roofs were being re-built at the time of the fire.

We hold a coffee morning from 1030 with lunch served from 12 at the Churches Centre on the 3rd Saturday of every month.  Check what’s on for details.

Services in church have resumed.